How I Met Your Mother

This is why I am a proponent of binge watching TV.

How I Met Your Mother recently wrapped up its 9 year run, and I have to admit, had I watched this show over the course of 9 years, I’d be as put off as the general feeling of the Internet seemed to be after the finale.

However, a story is more than just its ending, and while that might not seem true with this gimmicky of a show, I actually think that it applies even more so to this show than most.

To get everybody up to speed, HIMYM is a show about Ted Mosby, telling his teen-aged kids the story of how he met their mother back in the late ’00s. Involved in this story are Marshall and Lily, college freshmen sweethearts, Barney, a womanizing Casanova, and Robin, a career-oriented woman not interested in marriage. These five people (and a wide array of supporting characters) weave in and out of Ted’s story of how he met The Mother.

This should be a no-brainer, but I am not spoiler-proofing the rest of what I write here, so if you haven’t seen the show and want to, I urge you to stop reading this and go watch it.

HIMYM was kind of an odd duck of a show to me. While fitting snugly within various sitcom tropes, it found ways to subvert those and tell its story in a really unique way. However, it took a little time for me to warm up to the show and these characters. It started as much more vanilla than subversive. Laugh track, cheesy lines, the whole 9. But it doesn’t take long before these elements are diluted down into something more satisfying and you begin to feel a bond with the characters, like you’re at the booth in McClaren’s drinking beer with them and laughing at Barney’s latest outrageous attempt to get a girls number or Marshall’s fascination with Bigfoot. 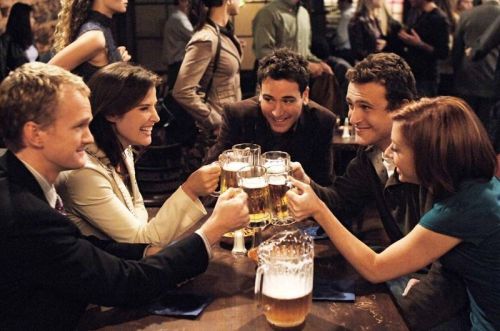 And the funny stuff was really funny. This was due to both writing and near-perfect casting. The show built its mythology really fast, with things like the Slap Bet, The Playbook, the gang eating “sandwiches,” Robin Sparkles, etc. Despite my initial hesitance to really enjoy this show due to the multi-camera aspect, it quickly proved wrong many of my preconceived notions of sitcoms of this type.

Good writing is crucial, but if you’ve got the wrong people bringing it to life, you’re dead on arrival. While I was at times annoyed by Lily or thought Ted was overly cheesy, the core actors inhabited their characters really well. And the guest stars were great. When Lily’s dad shows up at Thanksgiving and declares, “I brought Diseases!” it got a huge laugh from me. And the most obvious home run in guest casting is The Mother. From the second we see her interact with Lily on the train to Farhampton, it’s clear that Ted and Tracy will have the chemistry we’ve been waiting for for 9 seasons. Cristin Milioti is inspired in the role of Tracy, from her delivery of Ted-like lines and the stuff that keeps her grounded as a strong, individual character, like when Ted hears her sing “La Vie En Rose.”

Quick aside: for as much criticism as the Farhampton Inn gimmick of the final season took, it did give us this scene. For me, this scene has enough emotion and beauty to justify the entire existence of the final season. It is, without a doubt, one of my very favorite scenes of the whole series.

HIMYM had heart. This is due in large part to Ted. While I found Ted’s over-the-top optimism and nerdery annoying at times, he never gave up on his epic life’s goal to dream big. This makes the viewer really feel his break-ups with Victoria, or being left at the altar by Stella, or losing hope in Season 9 that he would meet the woman of his dreams. The show was also continually grounded by the excellent supporting cast. There are a lot of heartfelt supporting stories the show delved into, like the death of Marshall’s dad or Robin finding out she couldn’t have kids. It was stories like this, and seeing how the characters dealt with them, and how they supported each other, that fostered this very communal feeling between the cast and the audience.

And the show allows you to invest.  Hints and clues about The Mother are sprinkled pretty sparingly as the show goes on, and while some viewers might’ve been turned off by this (one could call this the Lost Effect, audience losing interest in questions that are left unanswered for seasons at at time), I found that the way the show consistently reminded us that this was a story of a guy who was going to meet the love of his life kept me ever on the hook. My interest was always massively piqued by a shot of the yellow umbrella, or Ted’s professorial classroom, or the fact that Robin was always referred to as “Aunt Robin” to the kids.

But all stories end, and this show eventually had to wrap things up, as that was the original gimmick of the show. Here are my thoughts on the finale:

For the most part, I quickly came to terms with the ending of the characters’ arcs (except Robin & Barney); what fell flat for me was not as much what was told but more how it was told. I’ll start with Robin and Barney. First, it was overwhelmingly frustrating to have the whole final season be rendered moot when Robin and Barney get divorced a week (in audience time) after their 23-episode wedding weekend. Secondly, there was nothing clear about why they divorced. In real life, a relationship has to go through a lot more than “you travel too much” for it to end, especially a relationship that was as pomped/circumstanced as Robin and Barney’s. Barney’s character had grown far too much over the course of the show for me to actually buy that he would have a problem with the demands of his wife’s job. It wasn’t enough to go straight to divorce.

The breakdown of Robin and Barney seemed flawed to me because it felt like an easy way for the writers to get the chess pieces where they wanted for Ted and Robin. It just made no sense that we’d spend an entire season building up to this marriage that immediately fails. Barney’s character arc was interesting as he matured from Playbook Barney to Robin Barney. It was overwhelmingly pathetic to see his regression post-Robin, and while I was touched by his vow upon meeting his daughter, it just felt weirdly crammed, too many grand character revelations or changes being fit into too short a time frame.

Now going back to what this show was about, it made complete sense to me that Ted would want his kids to hear the story as a roundabout way to ask if they were OK with him asking Robin out. Ted is a romantic, a dreamer, an incredibly emotional guy that wouldn’t be able to just outright ask his kids if they’re alright with him dating someone besides their six-years-passed Mother.

But Robin? Come on, Ted. I disliked this last chapter because fundamentally, I never liked Robin and Ted together. But on top of that, I greatly disliked the way the final chapter was told. There was so much not explained or shown to the audience that would help me reconcile the decisions of the characters. Namely, Ted’s perfect dream woman wife dies and we don’t see him work through that, grieve and heal before ending up with Robin. It was a complete disservice to Ted’s character that that aspect of his love life’s story wasn’t shared. It rang hollow, as Ted is the grand romantic. The Mother was his dream, and to end the show by having him asking Robin out without seeing him process and heal after his wife’s death felt very off-balance.

For as much as the show seemed to hammer home the point that life changes and that it is foolish to try and reclaim past friendships or at least recreate the memories you’ve shared with those closest to you, none of these characters ever actually change. Lily and Marshall are always together and longing and faithful to each other, Barney relapses after his marriage to Robin fails and goes back to his womanizing ways, and Ted stays ever the grand romantic. And then Ted ends by petitioning Robin yet again? It flies in the face of the lessons Ted was teaching his kids and by proxy, the show was imparting to the audience.

So in my opinion, aside from the obvious audience betrayal with the happy/not-happy ending (happy for Ted, not happy for the audience), the biggest problem with the finale was too much told in too short a time. This has been touched upon in numerous other posts I’ve read (which I’ll link to at the end), but one thing the writers could have done would be eschew the Farhampton Inn gimmick of the finale season and instead, spread the stories told in the finale over the final season. I had severe temporal dissonance after spending an entire season’s worth of shows covering one weekend, and then to have the finale cover decades worth of the gang’s story.

So where do I land with HIMYM? It’s weird to feel betrayed by a TV show, and while I might not go as far as feeling betrayed, I can at least understand why so much of the backlash to the end of the show was due to that feeling. For me, while I wasn’t in love with the series finale, any negative feelings I might have toward it are eased by how great the show was for so long. Unlike other comedies I’ve watched (Parks & Recreation, Modern Family, The Office big time), there was no clear downward slope in terms of quality. I honestly didn’t ever think that one particular season was worse than another. The show felt very cohesive to me, and that’s rare for a sitcom that ran for 9 seasons.

For me, the premise offered to us in the pilot created this tension that I desperately wanted fulfilled, but couldn’t ever be, by sheer design of the show. The story of Ted and The Mother didn’t end when they met, but for the audience, for who we really got to be invested in and know, their story basically did. Sure, we get to see that Ted and Tracy have two kids and a fair amount of years together, but we don’t honestly get any time seeing them grow. It was like the 9 year TV version of Sleepless In Seattle. We get to know one half perfectly, the other half indirectly, and then see them interact for an aggregate half hour over the course of the final season. Where is the true payoff for the viewer?

But I ultimately think that is a complaint due to both the nature of the show and how the story was closed, not about the actual story told. I enjoyed spending 9 seasons worth with these characters, and there will be a gang-sized hole in my media-consuming heart for a while.

Other great reads on the finale:

My last stray observation: the scene where Ted and Tracy actually met was perfect. Exactly as cheesy as it needed to be, perfectly romantic in every way, and wonderfully heart-warming chemistry between the two characters. And the yellow umbrella having the initials T.M. was beautiful. Ted Mosby, Tracy McConnell aka…The Mother. Inspired. 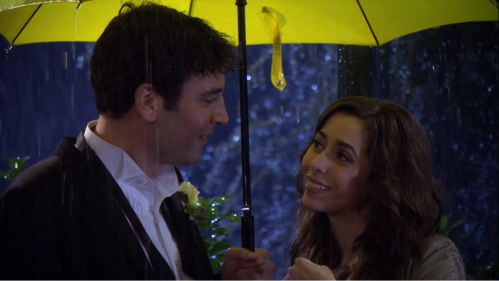 Tagged as encyclopaedia, go for Barney, How I Met Your Mother, marshgammon, nobody asked you Patrice, youuuuuu sonuvabeetch