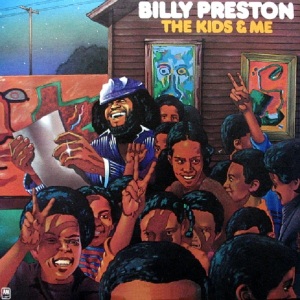 This is something of a notable album in this series, because while I don’t know The Kids & Me that well, it does feature one song which I know super well. “Nothing From Nothing” is the #1 Most Played Song in my entire iTunes library and has been for about seven years. In fact, with the first listen of this album for this review, it bumped the play count of “Nothing From Nothing” up to be the first song in my library to break into the 200s.

But the rest of the album certainly shouldn’t be thrown away. It functions as a really great snapshot of Billy Preston’s solo career work. I’d almost argue this album could be viewed as a blueprint for the rest of Preston’s solo work.

Lyrically, this album is pretty wide-ranging. You’ve got love songs, a gospel tune, social themes, and a few instrumental pieces. I don’t think Preston is the greatest wordsmith ever, with some of his songs leaning towards a little too sugary sweet or a pinch cheesy. There are a few heavy-handed spaces on this record, but it’s forgiven because nothing is really awful and the good stuff is really good.

I’ve always found Preston’s strength to be his music. This guy was an unbelievable keys player, starting his career at a very early age (appeared in a W.C. Handy biopic at age 12, met the Beatles while playing organ on tour with Little Richard at age 16, released his first solo album a year later, etc.). He played with a lot of heavy hitters throughout the ’60s, culminating in contributing heavily to the Beatles’ final studio album, Let It Be. He was so influential in those recording sessions that he actually kept the Beatles from completely fracturing and he finished the record with them. He is one of the few people referred to colloquially as the “fifth Beatle” (John Lennon actually suggested to the other Beatles that Preston officially join the band) and is the only musician co-credited on a official Beatles-sactioned release (the single “Get Back” is credited to “The Beatles with Billy Preston”).

So Preston had the musical chops. This album displays those really well. For my money, the apex of Billy Preston’s keyboard expertise is “Nothing From Nothing,” but there is a lot of really fantastic keys playing on this record. Preston’s instrumentals are a testament to his forward thinking, by featuring a Clavinet (or soundalike instrument) all over this record to create some really bizarre, funky sounds (“Struttin'” sounds like mosquitos in your ear). These instrumentals are some heavily funk-inspired jams.

But again, “Nothing From Nothing” is the pinnacle, both of Preston’s songwriting and his musical skills. This is an overtly happy sounding song, with one of the best chord progressions and coolest chord voicings I’ve ever heard. There is a bouncing ragtime rhythm and horns that add so much flavor to the tune. But Preston’s piano solo is absolutely insane. It’s like his two hands are speaking different linguistic dialects. His left hand is steadily pounding the rhythmic chords on the beat while his right hand is banging out an intricate solo that is rhythmically all over the place. It’s a masterpiece solo and adds energy to an already really energetic tune. I don’t think I’ll ever tire of this song.

There are some other notable tunes on this album, like “You Are So Beautiful,” which is a pretty cheesy song but important as it is the original version of the tune, written by Preston, which was later covered to huge success by Joe Cocker. Also great on the album is “Tell Me You Need My Loving,” which is a partial rewrite of an earlier Preston outtake tune called “All That I’ve Got” and kicks the album off in a really funky, groovy fashion.

Overall, this is a pretty good album, not just for the fantastic “Nothing From Nothing,” but also due to the representative picture of Preston’s solo work. If you only get your hands on one Billy Preston album, make sure it’s this one.

Tagged as Billy Preston, Old/Newish Albums, The Kids & Me